Extreme changes in seasonality in the Sierra Nevada can have lasting impacts on meadow health and could mean less water and carbon storage in high elevation wetlands, according to research conducted at UC Merced.

The results of work by then-graduate student and current staff member Chelsea Arnold and Professors Asmeret Asefaw Berhe and Teamrat Ghezzehei, both with the School of Natural Sciences, indicate that changes in meadow soils and vegetation caused by extreme weather conditions in the mountains over the past three years have decreased the ability of those meadows to bank water and store carbon.

The paper, published in the open-access journal PLOS ONE, is entitled “Early Spring, Severe Frost Events and Drought-Induced Rapid Carbon Loss in High Elevation Meadows,” and indicates that snowfall and snowmelt timing play critical roles in the development and sustainability of meadow ecosystems. 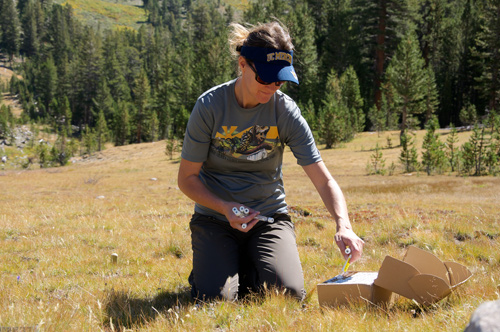 “If the onset of spring shifts to March, it means the snow is melting much earlier and the water is landing in reservoirs too soon,” Arnold said. “That means the ecosystem’s liquid checking account will soon be overdrawn, leading to a longer, drier summer for the high-elevation ecosystems, and decreased plant growth and large losses of carbon from the soil.”

Findings of this study highlight that the warming climate is likely to have a bigger impact than previously thought, Arnold said.

Soils store carbon, and large quantities of organic matter in the meadow soils allows the meadows to act as sponges to store water and release it slowly to downstream communities. “If these systems become degraded through drought and subsequent loss of carbon, they won't store as much snowmelt and the resulting watershed will be much ‘flashier’ as water will move rapidly from snowpack to the streams,” Arnold said.  That could mean more flooding, but earlier in the spring, leaving less water for the hottest part of the year when it’s most needed.

Arnold said the research could help resource managers deal with weather extremes, as they have been doing in the past few years as the state faces rapid drying and drought. Meadow restoration has become a critical part of the California Water Plan for statewide integrated water management, which also means more areas for research to be conducted, because mountain soils act as the state’s water banks.

During photosynthesis, carbon dioxide (CO2) is converted into organic compounds, and released back to the atmosphere during respiration in a process largely undertaken by microorganisms in soil.

The release of CO2, greenhouse gas that contributes to global warming, to the atmosphere during soil respiration is a key ecosystem process that controls how much organic matter stays in soil to support plant and microbial activities, stabilize soil against degradation, and store water and nutrients.

Arnold and her fellow researchers found that drastic changes in seasonality led to an average of a 100 percent increase in soil respiration in 2012 and 2013 over 2011.

The meadows experienced lower primary productivity of above-ground vegetation during the study period, producing 39 percent less biomass carbon in the same period, despite the fact that the growing season was longer in 2012 by 57 days, and longer in 2013 by 61 days.

The reduced carbon input, the large increase in gaseous loss of carbon and changes in soil structure led to a loss of water-storage capacity.

“These results demonstrate the dependency of these keystone ecosystems on a stable climate and indicate that even small changes in climate can potentially alter their resiliency—which can alter the watershed entirely,” Arnold said.