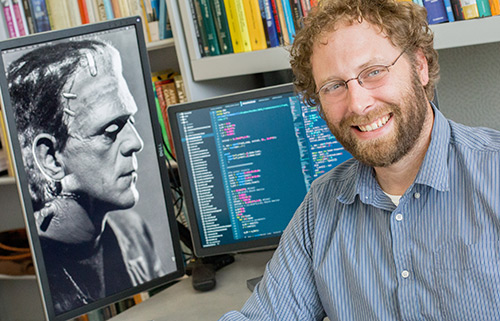 If fictional scientist Victor Frankenstein had created a mate for his nameless Creature, humans would have gone extinct in about 4,000 years, according to a new study co-authored by a UC Merced professor.

Scholars who typically examine the book from a literary perspective have focused on Shelley's knowledge of then-prevailing views on alchemy, physiology and resurrection, and have argued that “Frankenstein” is really the first work of science fiction. But the new study published today in the Oxford University Press journal BioScience (just in time for Halloween) shows that Shelley created a work based in science fact, far ahead of her time.

“’Frankenstein’ is actually steeped in ecological ideas, such as niche overlap and competitive exclusion, that wouldn’t even be defined or named until about a hundred years later,” said biology Professor Justin Yeakel with the School of Natural Sciences at UC Merced. “The genius of Mary Shelley lies in how she combined and repackaged existing scientific debates to invent the genre of science fiction. Our study adds to Mary Shelley's legacy by showing that her science fiction accurately anticipated fundamental concepts in ecology and evolution by many decades.”

Yeakel and co-author Nathaniel J. Dominy, a professor of anthropology and biological sciences at Dartmouth College, explored the biological and ecological concepts in the novel and discovered that Frankenstein, in refusing to build his Creature a mate, would have saved mankind from extinction.

“It’s an invasion-biology problem,” Yeakel said. “In the story, the Creature suggested that it and its mate could live in the wilds of South America and eat no meat of any kind, avoiding competition with humans. However, this idea may have been somewhat treacherous on its part, as we show that reproducing in such a low-competition environment would actually have allowed its population to increase faster, driving humans to extinction earlier.”

At first, Frankenstein considers the Creature’s idea, but — Yeakel and Dominy suggest — realizes the reproductive potential of a pair of bigger, stronger, highly sentient and intelligent Creatures and the potential for human extinction by out-competition. That’s a concept ecologists know as competitive exclusion.

“The principle of competitive exclusion was not formally defined until the 1930s,” Dominy said. “Given Shelley's early command of this foundational concept, we used computational tools developed by ecologists to explore if, and how quickly, an expanding population of creatures would drive humans to extinction.”

The authors developed a mathematical model based on human population densities in 1816, finding that the competitive advantages of the Creatures varied under different circumstances.

The worst-case scenario for humans would have been the one the Creature suggested: A growing population of Creatures in a place where they could flourish without threat or competition.

The study is a thought experiment that casts new light on one of the many underlying horrors of the novel: human extinction. It also has real-word implications for how we understand the biology of invasive species.

Charles Darwin contributed to the science of invasive species in his book “On the Origin of the Species,” published in 1859.

“Mary Shelley wrote ‘Frankenstein’ in 1816 — long before Darwin’s ‘Origin,’” Yeakel said. “Her insights and intuitive grasp of ecological principles are quite remarkable.”