In only its second year, the conference attracted 85 participants from universities around Northern and Central California. Students from UC Merced, UC Davis, San Jose State and Fresno State came together to discuss their work with colleagues and collaborators.

Since its founding in 2010 by then-graduate student Nitesh Kumar and Professor Arnold Kim, the UC Merced student chapter of SIAM has been instrumental in providing opportunities for students to network with peers, postdocs and professors who share a common interest in applied mathematics and related disciplines. The student-led group, under the guidance of faculty advisor Professor Noemi Petra, coordinates efforts to bring esteemed mathematicians and fellow math enthusiasts from around the country to UC Merced. 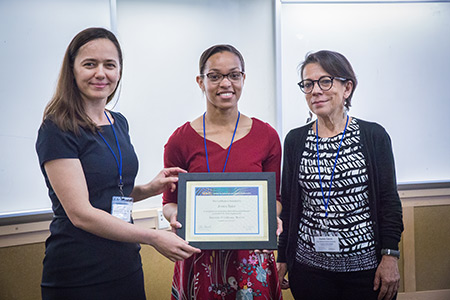 This year’s conference celebrated the efforts of students working to expand institutional and geographic diversity from neighboring universities, as well as increase undergraduate participation.

Jessica Taylor, a Ph.D. candidate in UC Merced’s Applied Mathematics graduate group, was awarded the SIAM Student Chapter Certificate of Recognition “for her outstanding efforts and accomplishments on behalf of the SIAM Chapter at UC Merced.” Taylor, who graduated from UC Merced in 2015 with a B.S. in applied mathematics, served as chapter secretary from 2016-17 and currently serves as the group’s president. And though her incumbency began only recently, she’s already setting an ambitious agenda for the group.

And she’s not alone.

“I’m huge on research,” said Arias. “I think we need to do more to promote starting research early.”

The daylong conference culminated in a poster session showcasing original student research and highlighting the broad scope of applied mathematics and its relevance to a wide range of fields. The posters on display included work on blood coagulation dynamics, methods to better predict sea level rise, ways to lower medical imaging costs, and how penguins huddle to stay warm in unforgiving arctic climates.

Notably, participation was not limited to mathematicians. SIAM encourages contributions from students majoring in other subjects. 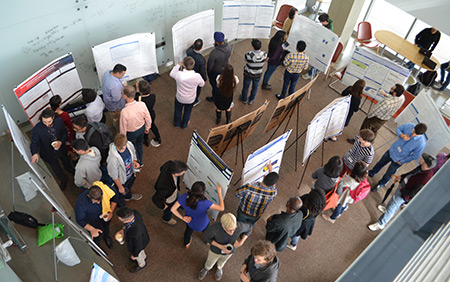 Benjamin Juarez, an undergraduate biology major, presented work he did under the mentorship of applied mathematics Professor Suzanne Sindi. Now in his third year, Juarez is working to identify naturally occurring genetic variants that make people immune to malaria. Likewise, Soheil Fatehiboroujeni, a graduate student in Mechanical Engineering, presented his research on a computational framework for parameter estimation targeted towards molecular dynamics, under the joint mentorship of Petra and mechanical engineering Professor Sachin Goyal.

Student research wasn’t the day’s only highlight. The conference also featured opening remarks by Juan Meza, dean of the School of Natural Sciences, and a keynote address from Daniella Calvetti, the James Wood Williamson professor of mathematics at Case Western Reserve University. Calvetti spoke to students about her work in the field of uncertainty quantification (UQ), focusing on the interactions and synergies of UQ and numerical analysis.

The group continues to grow and is always looking to add new members interested in applied mathematics.

“I am so proud of our chapter officers,” said Petra, who has mentored the group since 2014. “The great success of this event can be attributed to their dedication and excellent teamwork.”