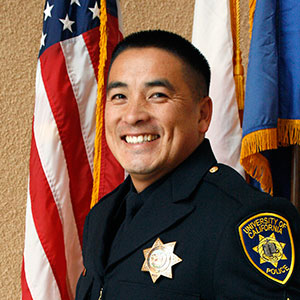 The University of California, Merced, announced today (April 12) the appointment of Chou Her to chief of police, effective immediately.

Her, the first person of Hmong descent to lead a UC public safety agency, brings nearly two decades of law enforcement experience and years of demonstrated leadership. He has served the UC Merced community since the campus opened in 2005 and will continue to serve students and staff and faculty members as the campus’s third police chief.

“Chief Her has played a critical role in shaping the department as it and the campus have matured over the past 12 years,” Vice Chancellor for Business and Administrative Services Michael Reese said. “He has helped develop a policing philosophy that is appropriate for a public research university with UC Merced’s unique characteristics.”

“It’s an honor to be selected to lead UC Merced’s police department,” Her said. “I look forward to continuing and growing our positive engagements with our campus community and the greater Merced community.”

Her has extensive police and emergency management certification and a demonstrated commitment to community involvement. He was promoted to lieutenant in 2011 and captain in 2015.

Her was born in Laos, and his family moved to the United States when he was 3. He has lived in Merced for most of his life and has built a strong connection with the campus and the local community.

Before joining UC Merced in 2005, Her was a deputy sheriff for the Merced County Sheriff’s Department for five years and a probation officer for Stanislaus County for nearly a year.