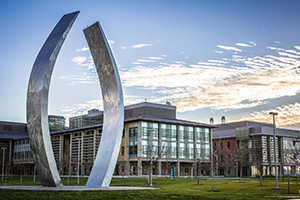 At just 12 years old, the graduate programs at the University of California, Merced, are already among the best in the nation, according to the U.S. News & World Report’s 2018 Best Graduate Schools rankings.

UC Merced’s School of Engineering made its second appearance in the graduate school rankings, released today (March 14), rising to No. 127 in the nation after debuting at No. 140 in 2015.

The school made an impressive debut in the environmental engineering rankings, placing No. 70 in the nation in that discipline. UC Merced also made a major jump in the psychology rankings, appearing at No. 90 in the nation after debuting at No. 158 in 2015.

Dean Mark Matsumoto said the School of Engineering’s ranking reflects the perception of a university that is quickly coming into its own.

“This ranking is an indication of a maturing School of Engineering with an improving reputation,” Matsumoto said. “This milestone is due to the quality of the faculty and students we are recruiting. I am proud of the achievements of our school.”

U.S. News surveyed graduate programs at more than 200 schools that grant doctoral degrees, and the rankings are based on a variety of criteria. For the engineering designation, the criteria included mean GRE quantitative scores, acceptance rate, student-to-faculty ratio and research activity.

Matsumoto said the engineering rankings, particularly environmental engineering, were bolstered by a number of important research initiatives being led or supported by UC Merced, including the Sierra Nevada Research Institute, UC Water, UC Solar and the Center for Information Technology Research in the Interest of Society (CITRIS). The campus offers graduate degrees through interdisciplinary groups such as Environmental Systems, Electrical Engineering and Computer Science, Biological Engineering and Small-Scale Technologies, and Mechanical Engineering.

The U.S. News rankings in psychology, as with all doctoral programs in the social sciences and humanities, are based solely on the results of peer assessment surveys sent to academics in each discipline. UC Merced has developed particular strengths in areas such as developmental psychology, health psychology and quantitative psychology.

“We are delighted to see this rapid rise in ranking in such a short span of time,” she said. “It is testament to the outstanding quality and hard work of the faculty and graduate students that UC Merced has attracted to the program. We enjoy a particularly collegial and productive environment at UC Merced.”

UC Merced’s inclusion in prominent national rankings adds to a growing reputation and global profile for the newest UC campus. Since opening in 2005 as the first research university built in the 21st century, UC Merced has grown from 875 students to more than 7,000, with plans to enroll up to 10,000 students upon completion of the Merced 2020 Project.

UC Merced made its debut on the U.S. News overall Best Colleges list last year, ranking No. 78 among public universities and No. 152 overall. Also last year, UC Merced made its first appearance on the industry-leading Carnegie Classification of Institutions of Higher Education, earning designation as a “doctoral-granting university with higher research activity” — or R2, the second-highest classification for American research universities. It is the youngest campus on that list, as well.

The campus also ranked No. 8 in Washington Monthly’s “Best Bang for the Buck: Western Colleges” list and No. 41 in the magazine’s national rankings, with the fifth-best mark among all schools in the area of social mobility. It also placed in the top 100 for the fourth time in five years on the Sierra Club’s “Cool Schools” list, which honors the nation’s most environmentally sustainable colleges and universities.

“I am very pleased that our graduate programs continue to rise in the rankings of national organizations such as U.S. News & World Report, especially because we are still such a young institution,” Vice Provost and Graduate Dean Marjorie Zatz said. “This is due in large part to the dedication of our excellent faculty and the shared values of diversity, interdisciplinarity and research excellence that support and inform our graduate training programs. It is an exciting time to be a part of UC Merced.”