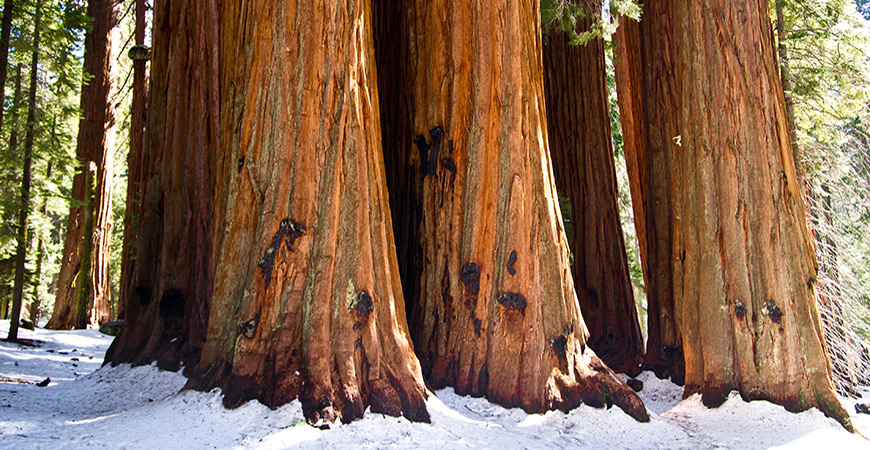 Giant sequoias in the snow. Photo courtesy of the National Park Service.

A new study published online in the Journal of Geophysical Research: Biogeosciences finds that the giant sequoia, a fixture of California’s Sierra Nevada forests for the past 2.6 million years, might be in jeopardy from the effects of drought and climate change.

The iconic trees, which only grow in some 70 groves scattered over an area of about 55 square miles on the western slopes of California’s Sierra Nevada mountains, were spared the widespread tree mortality that recently occurred in California forests, claiming 102 million trees over a period coinciding with the state’s 2011-2015 drought.

However, researchers from the Sierra Nevada Research Institute (SNRI) at UC Merced, the U.S. National Park Service, the Chinese Academy of Sciences and Sun Yat-sen University found that sequoia groves are showing signs of stress, suggesting even these normally resilient trees are becoming increasingly vulnerable to multi-year droughts, which are projected to continue increasing in severity because of climate change.

“Giant sequoias have this mystique, that once they reach maturity, they are practically immune to the forces that kill other trees,” said Koren Nydick, study coauthor and science coordinator and ecologist at Sequoia and Kings national parks. “But during and just after the recent severe drought, we've seen a small number of sequoias die, at least in part due to the dry conditions. It's an important wake-up call.”

Using data from Landsat, an Earth-observing satellite fleet jointly managed by the U.S. Geological Survey and NASA, researchers evaluated greenness and wetness in sequoia groves and adjacent forests. The analysis did not tease out the effects on just the sequoia trees, but instead presents a picture of changing conditions for the suite of tree species in the groves.

"...during and just after the recent severe drought, we've seen a small number of sequoias die, at least in part due to the dry conditions. It's an important wake-up call."

In the past, increased biomass and water usage like this wouldn’t have raised any red flags. During multi-year droughts, when local precipitation falls short of the amount needed to sustain sequoia groves, the trees could tap into supplies of stored subsurface water. But with droughts projected to be more severe, and increasing forest biomass potentially placing ever higher demands on limited supplies of stored water, these water caches are being depleted without being replenished, limiting the length of time sequoia groves can survive during future dry spells.

But the study shows that not all sequoia groves are equally vulnerable. Lower-elevation groves that lie below the rain-snow transition zone experienced the greatest increase in greenness over the past three decades, potentially making them more vulnerable to droughts than higher-elevation groves, which have access to water stored in seasonal snowpack in addition to stored groundwater. The study also shows that grove areas that benefit from water drainage from the surrounding hillslopes are less vulnerable than groves upslope or on ridges.

Researchers also found that sequoia grove wetness — an indicator of forest health — dropped during the 2011-2015 drought to five times below the normal level of variability seen during the 1985-2010 pre-drought period, a 50 percent greater decrease in wetness than that observed in surrounding forests during the same drought.

“This work is telling us that during the drought, loss of moisture in sequoia groves was quite severe, but this change was not uniform across the groves,” Nydik explained. “That is to say, not all grove areas are the same. Some places are more vulnerable to droughts than others.”

Up to now, giant sequoia groves have proven themselves resilient refuges, areas where trees can survive in the face of prolonged drought and rising temperatures. But the study’s authors worry that this will change unless policy makers and forest managers take action.