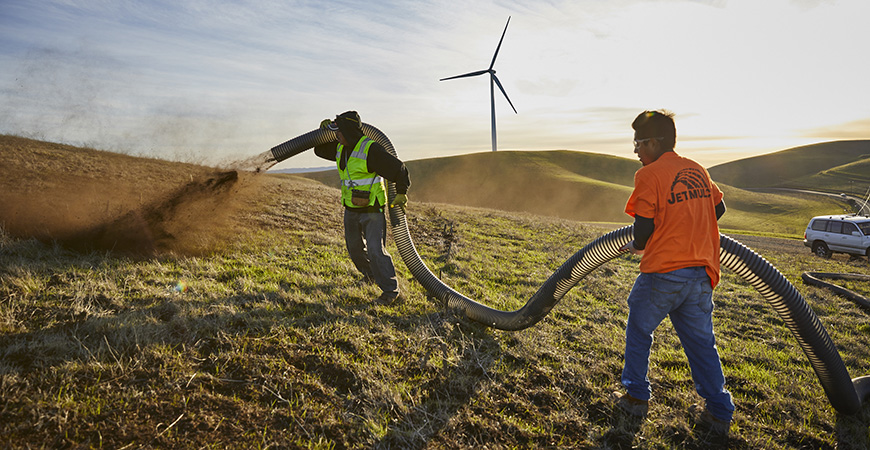 A thin layer of compost is applied to grasslands in the Altamont Hills. This practice of carbon farming has been identified by the state as a pillar of its approach to fighting climate change.

A thin layer of compost applied to grasslands could help fight climate change by capturing carbon from the atmosphere and storing it in the soil, recent research shows.

UC Merced Professor Rebecca Ryals and a team of researchers, ranchers and public agencies will demonstrate this practice for the first time in the East Bay. The project, which began Dec. 3, is funded by a California Department of Food and Agriculture Healthy Soils Demonstration grant.

The collaboration between Ryals, the Alameda County Resource Conservation District and StopWaste (the Alameda County Waste Management Authority) is an example of a partnership that is working to advance the scientific understanding and demonstrate success of ecosystem-based climate solutions in California.

The project began with researchers applying a thin layer of compost on a 10-acre sloped section of rangeland in the Altamont Hills east of Livermore that is owned by StopWaste. Applying compost to rangeland is part of local and statewide efforts to engage agricultural producers in “carbon farming,” practices that help capture greenhouses gases such as carbon dioxide, bolster groundwater recharge, reduce erosion, and increase plant productivity. The state has identified carbon farming as a pillar of its approach to fighting climate change.

The researchers chose the sloping land to measure results and compare them to tests already conducted on flatter areas.

“Most grasslands in California occur in places with highly varied terrain,” Ryals said. “If the results of our study are positive, planners and landowners should feel more confident about applying compost to a wider array of locations, including hillsides, which would greatly expand the applicability of the practice throughout the state.”

“The goal of our project is to demonstrate to ranchers that they can adopt new practices or adapt existing practices to sequester carbon,” Alameda County Resource Conservation District biologist Hillary Sardiñas said. “Many farmers and ranchers already use climate-beneficial practices, but they may not recognize that what they’re doing can help mitigate climate change.” 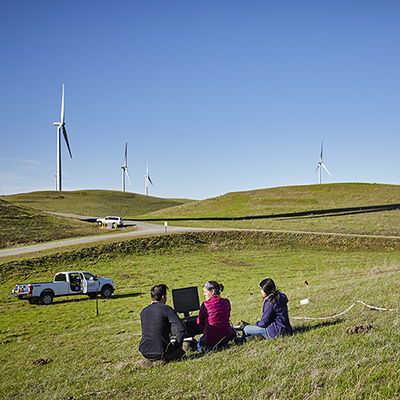 Researchers monitor the compost spreading from their post in the Altamont Hills.

The Resource Conservation District recently developed a Carbon Farm Plan for StopWaste’s 1,600-acre property. The plan outlines practices — from compost application to riparian restoration — that would sequester carbon while supporting the grazing operation and enhancing wildlife habitat. Spreading compost is viewed as the first phase in several designed to capture carbon.

Ryals is a member of the Department of Life and Environmental Sciences in the School of Natural Sciences . Her Agroecology Lab studies ecosystem-based climate solutions and researches the effects of organic matter amendments to agricultural soils.

Over the next three years, Ryals and her lab will measure changes in the amount of carbon stored in the soil and greenhouse gases that are emitted from soil. The team will also measure the co-benefits provided by higher levels of soil carbon, including better water infiltration and forage production.

The partners plan to continue implementing carbon farm practices, measuring the results, and inviting the public, farmers and ranchers to learn how they can get involved.

“This is just the first step,” said Kelly Schoonmaker of StopWaste. “Carbon farming shows a lot of promise in helping to reverse climate change impacts while returning organic matter back to the soil. We’re also excited about the potential for improved forage for the cows, increased water holding capacity in the soil, and being a model for other landowners in the state.”