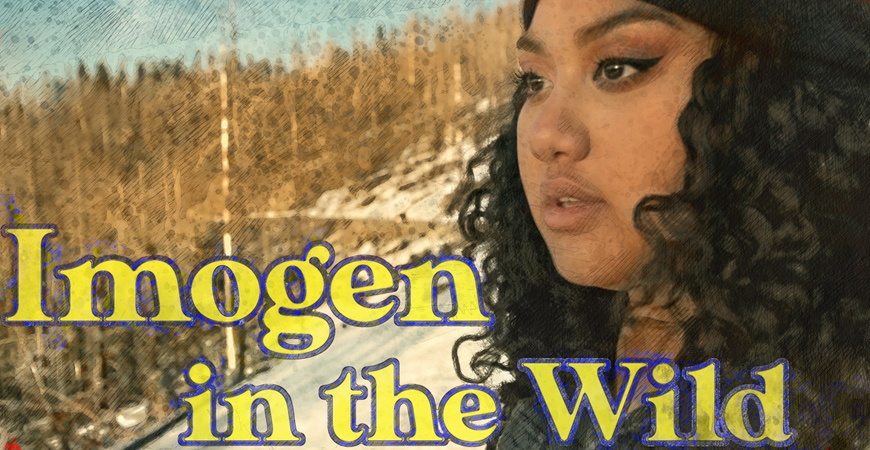 The film addresses concerns of land use and environmental justice facing California. Photo by Shawn Overton.

The 90-minute film is an adaptation of Shakespeare's play "Cymbeline," rewritten to address concerns of land use and environmental justice facing California. In this version, Cymbeline is the mayor of "The Town" near "The Wild," represented by Yosemite National Park. Cymbeline is about to sign a deal that would exploit the land for its resources, with no regard for the ecosystems it harbors, the indigenous people who have cared for it for millennia or the damaging effects such a deal would have on the Town's health.

The film highlights several forms of environmental activism that are mobilized to "save The Wild," including eco-anthems written by UC Merced students. It attempts to show the links between the mistreatment of people and the land, and the need for collective, collaborative action against destructive corporate practices.

"The work done by the 'Imogen in the Wild' team has been extraordinary," Brokaw explained. "It was truly one of the most ambitious theatrical projects of the pandemic, and the result is a radical imagining of Shakespeare's play that centers on notions of environmental justice, which has, to our knowledge, never been done before, and certainly not in a national park."

The team spent countless hours working on the film at UC Merced and in Yosemite during the spring and summer. Among the 40 students who took part in the filmmaking was fourth-year English major Sofia Andom, who stars in the role of Imogen. In an interview with Monica Perales ('19), Andom explained the advantages of filming in Merced and around Yosemite, and of not being constrained to a stage.

"If this production was on a stage rather than in a film, it wouldn't have the same impact because we wouldn't be physically going anywhere, and we would be in one space," Andom said. "Whereas with the film, moving from place to place, the audience is really able to see our perspective as characters and how we feel about the wild, how we feel about the environment." 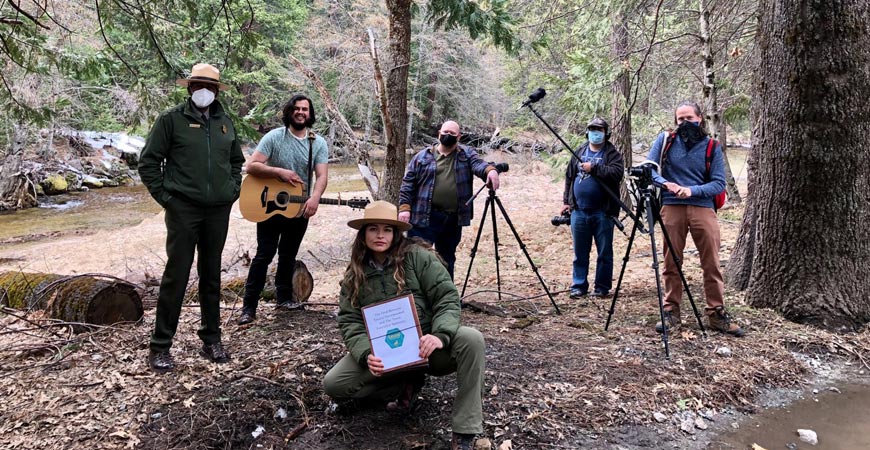 Once the cameras stopped recording, work continued behind the scenes. Multiple editors and composers had the task of ensuring the film looked and sounded its best. This was all happening amid the pandemic; therefore, precautions were put in place to ensure everyone's well-being.

Fourth-year English major Brandon Cooper, who was involved in post-production editing, said in an interview that working together but doing it while separated from each other was an impactful experience.

"We're able to make a movie, and obviously some of it has to be physical: You have to film, you have to have people together to do that," he said. "At least from my part in the project, everything can be completed online. Of course, in some ways, it would be better to be in-person, but it's still pretty cool that we live in a world where that's possible." 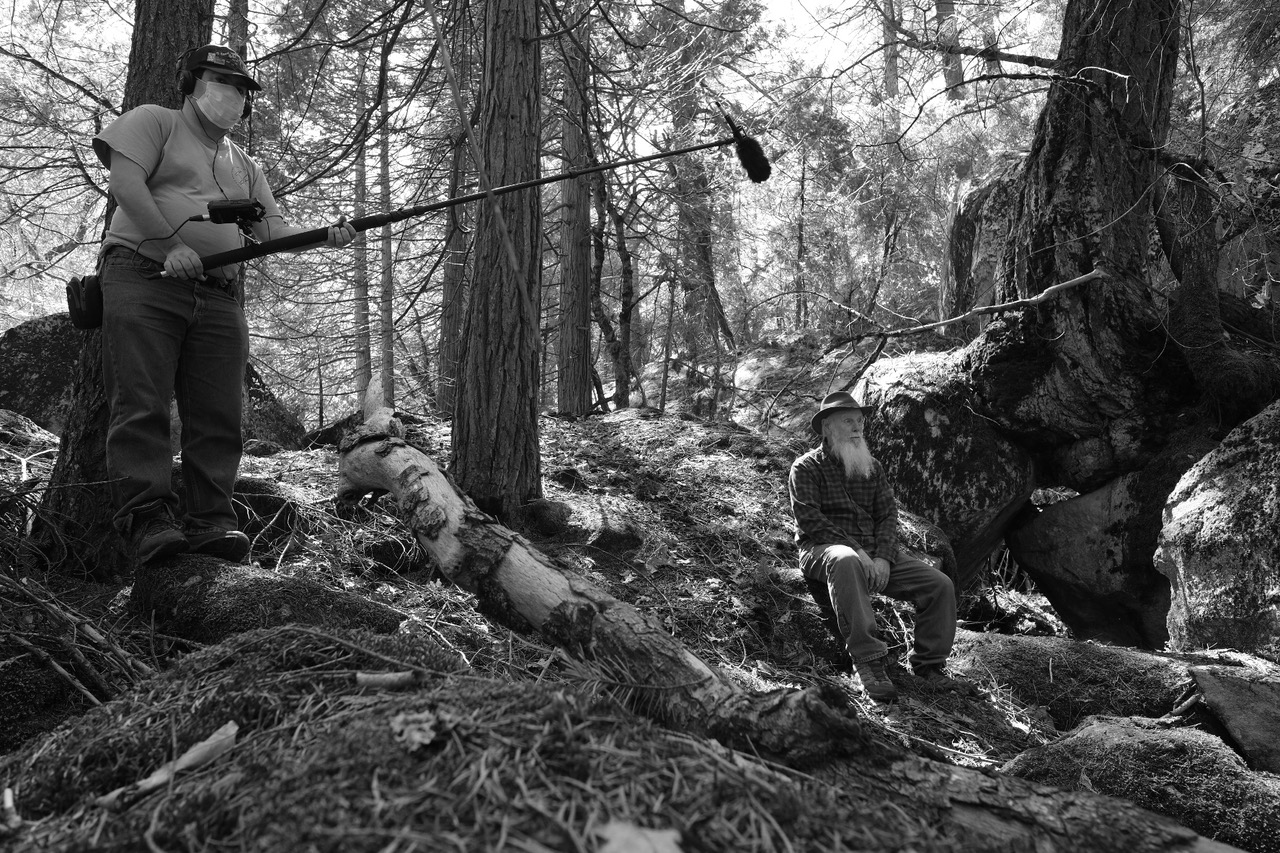 Cathryn Flores, a fourth-year English major, was one of the film's composers and singers. She said her eco-anthem "Earth's Cry" was written with young people in mind who are passionate about climate change but may not know how to take action against it.

"I hope that they can share [the song] with different friends and family members that may be on the edge of not understanding what climate change really means," she told Perales in an interview. "This song can help bridge other people who may be really uncomfortable talking about climate change: maybe they're able to sing the lyrics in the car and just spread more advocacy toward this."

The work by another Bobcat was also vital to this production. Amber Loper ('21) wrote an adaptation of "Cymbeline" for their senior thesis project, which was influential for the film. Loper also played the role of Guiderius in the film.

While most of the people who took part in making the adaptation came from the UC Merced campus community, external support was indispensable to making the film a reality. "Imogen in the Wild" also stars five professional performers: Lisa Wolpe as Iachimo, Dennis Brown as Cymbeline, Connie Stetson as Queenie, Chase Brantley as Cloten and Lee Stetson as Belarius. Yosemite National Park Director of Public Affairs Scott Gediman and Ranger Jamie Richards assisted with the project's production and logistics, and appear in the film alongside a few of their NPS colleagues, including UC Merced alumna and park Ranger Jessica Rivas ('15).

The film has been available for a short time, but it is already garnering international attention. University of New Brunswick Professor Randall Martin, a leading expert on Shakespeare and the environment, wrote that the film is a "deeply thoughtful and artistically layered adaptation of 'Cymbeline'" in the first academic analysis of the work, noting "the film's activist commitment to making (bio)diversity and intersectional justice the cornerstones of environmental equity."

Anyone interested in viewing "Imogen in the Wild" for free can watch it on YouTube, and a subtitled version is forthcoming during the winter break.