Michael Eissinger has an old black-and-white photograph of a farmer named Knox and his three teenage sons standing in a cotton field with a long, 100-pound bag of cotton. He holds up the photo at conferences and public talks and asks where it was taken — inevitably, someone guesses “Mississippi,” and Eissinger takes some delight in correcting them: “Madera.” 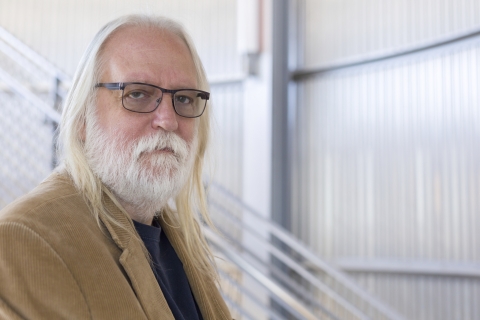 When you think about the history of the Central Valley, you don’t often think about cotton plantations. But Eissinger, a World Cultures Ph.D. student at UC Merced, is aiming to change our perception of the Valley’s past.

“A big part of what we call agribusiness in the Valley today is an extension of the plantation system — large pieces of land owned by a few people and worked by some subaltern group,” he said. “If you think about our history in terms of blacks picking cotton, there is a direct correlation to the plantation right here in the Valley — and yet none of it is a part of our social or regional memory.”

Eissinger, who works with Professor Robin DeLugan, considers himself an ethno-historian, using theoretical foundations and methodology from history, sociology, archaeology and anthropology to piece together the story of these communities and their residents.

His dissertation research focuses on reconstructing the history of primarily African-American rural settlements and communities — many of which came into being because the agriculture industry would recruit low-cost labor to live and work in “labor camps” sprinkled throughout California.

When mechanical innovation began to replace some of agriculture’s dependence on manual labor, the workers stayed behind and put down roots in the area — but as Eissinger puts it, their history is in danger of being “swallowed up by the Tule fog.” He hopes his work repositioning them into their rightful place in regional history will help them better define their present and re-envision and shape their future.

“UC Merced is the only place where I could really do this work,” he said. “From a research standpoint and a foundation standpoint, this is the perfect place for me.”

An oral history assignment in one of Eissinger’s undergraduate classes at Fresno State University sparked his long, continued interest in Central Valley history. As a result of that initial assignment, he worked extensively with the Madera County community of Fairmead, even writing a book about the history of the town for its centennial anniversary in 2012.

The book has been helpful to his continuing Ph.D. research. Showing what he’s done for Fairmead helps him establish credibility with residents of similar communities.

“That’s how you do the work,” Eissinger said. “You gain some kind of trust, and then you sit down and ask them about their lives, and then you triangulate and try to put it together from there.”

Photos have played a large part in Eissinger’s work of late. He connected with photographer Earnest Low, who took a series of photographs of black workers in the fields of Teviston during the early 1960s but never collected any information about the subjects. Eissinger has been attempting — with some success — to identify the people in those photographs and learn more about their lives.

“It’s an amazing process,” he said. “When people see these pictures — pictures of them, pictures they’ve never seen, from a period in life where there are very few, if any, pictures — it’s like I’m able to give them back part of their memories.”